The new Thor is coming out, in which Thor’s hammer goes to a woman, and she become Thor. My daughter, who is 5, is excited. Stay tuned for Halloween costumes later this month, in which she raises her hammer into the air, and shouts, THOR!

I’m not a comics expert, but Marvel seems to have done a better job with racial and gender diversity in their comic lines. Their movies also include some strong female characters, though tend to put them to the side a bit in marketing (where’s Gamora? Where’s Black Widow too in the products)? I also noticed that Gamora’s big fight was with another woman, a hackneyed approach, but whatever. Marvel’s doing a good job compared to this …

This is an actual shirt, sold to Tweens, in Walmart, licensed by DC. Now that’s the same thing as DC putting out this product, they were just happy to cash the check when someone licensed it.

The shirt has been well covered in the media, with the Mary Sue making a positive case for female heroes being badasses merchandise. 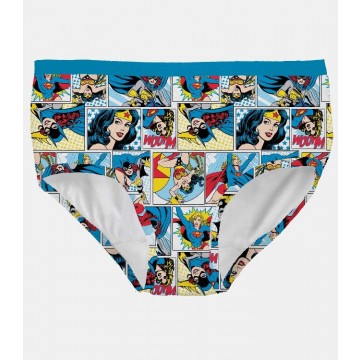 See, that’s not so hard. It sells well. It pleases my daughter even though it turns out it’s hard to read the comic on your own underpants while you are wearing them.
In the meantime, DC is saying they will re-examine their licensing practices. I’ll believe it when I see it.
P.S. The history of Wonder Woman is entirely wrapped up in the invention of birth control, Planned Parenthood, sexual experimentation in the early 20th century, and all sorts of other fascinating things, as described here by Jill Lepore.