Last week Maureen Wallace wrote an excellent article surveying, as she puts it, the “good, bad, and wacky” in “Marketing” Down Syndrome. You should all go read it.

I have, of course (for those who read me often), mixed feelings about the marketing of Down Syndrome. In general, I’m happy to see awareness, visibility, and inclusion. But tokenism annoys me. Take this image from Target, a few years old now.

I was thrilled to see the boy with Down Syndrome there. On the other hand, let’s count: African-American (light-skinned), Latino, White, Asian – and now Down Syndrome (and white). I’m glad DS has made the list of tokens to include, and I know it’s just an advertisement, but this ad doesn’t really mean anything on its own. But that doesn’t mean it lacks significance. Perhaps, just perhaps, such moments of token inclusion signify broader societal acceptance of people with disabilities.
Also the boy is really cute. But what about people with disabilities who aren’t so cute by normative standards?

Back to Wallace’s piece. She’s not looking at commercial marketing, but the use of marketing techniques to spread awareness and to, perhaps, re-shape societal attitudes towards Down Syndrome in such a way that increased inclusion will follow. She writes:

For organizations whose missions include the words, “advocate for individuals with Down syndrome,” their efforts to educate often live through targeted marketing campaigns intended to overcome stigmas and communicate the positives about a person with Down syndrome.

But when does that effort go too far? When does marketing become promotion of stereotypes? What if those efforts impart the illusion of a child or adult with superhuman, spiritual qualities?

This puts Wallace squarely in the world that I, often grumpily, inhabit – questioning overly positive language.

She moves through several variants: Kids with DS are special gifts from God (wouldn’t all kids equally be special gifts from God?) given only to special families. She talks about disability versus different abilities. She looks at the complex roles that national and local organizations play. Really, it’s a long and thorough article, and very balanced, and you should just read it. But here are three more comments: 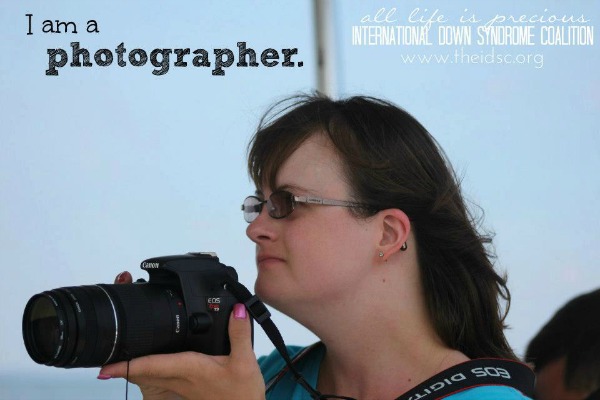 This campaign I like a lot. For one, it’s not a cute toddler. Second, it just makes a simple, clear, declarative statement. She is a photographer. It’s the best kind of “people-first” language, rendering the diagnosis a distant component of a complex, interesting, three-dimensional person.

But Wallace herself has waded into these waters. Apparently, she encountered resistance over a campaign that showed children with tongue protrusion. She writes:

While we rarely notice our son Charlie’s tongue protrusion anymore, I’m aware that the characteristic stands out to others, and so I hesitated when I saw the video.

My husband noticed it, too. We ultimately agreed it’s authentic and that’s what the PSA was about — authenticity in how people with Down syndrome are a part of our lives.

Not everyone sees it that way, probably because the tongue protrusion is a visible difference, and the organization received some criticism for including those shots. The truth is that people with Down syndrome do tend to have visible differences, from slanted eyes to smaller ears.

Receiving flack for tongue protrusion worries me, but I’m glad to see Wallace and her husband emphasizing authenticity. The issue speaks back to my post from Tuesday on sweetness or cuteness porn. Many kids and adults with Down syndrome are cute. My son Nico is super cute. This morning, I found him reversed on his bed, head partially buried under the sheets, and he giggled when I came in and showed me his belly so I would tickle him. Cuteness overload! But cute can only open the door. Behind that door, are people who do not meet contemporary norms of cute or attractive. Learning to see past disability has to mean getting past cute.

Wallace’s article then shifts to one of the worst pieces on the “angel/retard spectrum” that I have seen. 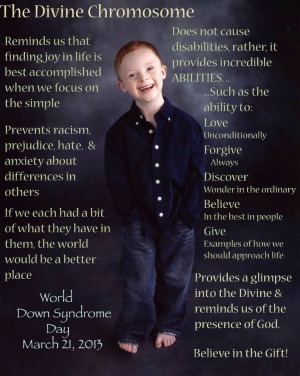 I believe the author of this page, which was posted on a Facebook page for a book The Gifted Choice, which I have not read, means well. But this is the most egregious kind of “angel” writing I’ve seen. The chromosome is “divine.” It’s a glimpse into the divine. There’s no disability, just incredible abilities. It’s Down syndrome as “super-crip.”
So go read the piece and see the whole spectrum of “marketing” campaigns dissected.

4 Replies to “Marketing Down Syndrome”