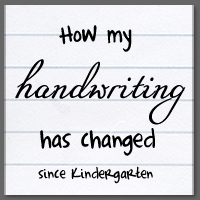 There’s a handwriting system that my son’s teachers use called “Handwriting without Tears.” They have an app (that I don’t really like) and all kinds of classroom curricula (which teachers seem to like). I always laugh a little at the name, because for me, handwriting caused tears.

As an adult, I’ve come to terms with my quirky brain and dyslexia and my general trouble with spatial relations. I have the fine motor control to play instruments, but something about trying to form shapes and letters on pages was and is very difficult for me. I can do basic clear printing with intense concentration.

Throughout elementary school, I was criticized for my handwriting. I remember my mother once going through weeks or months of papers, trying to figure out how to improve my handwriting (a very sharp pencil was one suggestion). It wasn’t just my dyslexia, I was also sloppy, though I’ve come to see certain kinds of sloppiness as a coping mechanism for my strange brain (i.e. if I intentionally screw up, then I don’t have to wonder why my brain doesn’t work right). At any rate, I hated writing and my handwriting is a disaster.

When I was in 8th grade, we got a personal computer with an early word processing program. It changed my life. It divorced the act of writing from the act of forming letters with my hands. A typewriter could have done the same, but using a typewriter was not normal for 7th graders, whereas the new age of computers changed things. As I am now steeped in the world of assistive technology for my son, I think back on the computer and the word processing program as my own form of assistive tech. Anyway, as Sara Hendren regularly argues, all technology is assistive technology, from motorized wheelchairs to shoes to hearing aids to glasses.

I’m writing this in the wake of many friends sharing a New York Times piece lamenting the end of handwriting teaching.

Psychologists and neuroscientists say it is far too soon to declare handwriting a relic of the past. New evidence suggests that the links between handwriting and broader educational development run deep.

Children not only learn to read more quickly when they first learn to write by hand, but they also remain better able to generate ideas and retain information. In other words, it’s not just what we write that matters — but how.

“When we write, a unique neural circuit is automatically activated,” said Stanislas Dehaene, a psychologist at the Collège de France in Paris. “There is a core recognition of the gesture in the written word, a sort of recognition by mental simulation in your brain.

A 2012 study led by Karin James, a psychologist at Indiana University, lent support to that view. Children who had not yet learned to read and write were presented with a letter or a shape on an index card and asked to reproduce it in one of three ways: trace the image on a page with a dotted outline, draw it on a blank white sheet, or type it on a computer. They were then placed in a brain scanner and shown the image again.

The researchers found that the initial duplication process mattered a great deal. When children had drawn a letter freehand, they exhibited increased activity in three areas of the brain that are activated in adults when they read and write: the left fusiform gyrus, the inferior frontal gyrus and the posterior parietal cortex.

Let’s assume that all of this is correct. The value here isn’t handwriting, but the neurological processes that accompany handwriting.

Handwriting is going away. Not scribbling quick notes on pads, but the era of formal cursive handwriting, the very form of handwriting that seems to most provide these neurological benefits, is coming to an end.

The solution is not to lament the loss of cursive and not to force kids to learn cursive anyway, despite its lack of utility, but rather to find other means to stimulate related neurological processes. Is it art? Is it rock climbing? Is it baking bread? I don’t know, but let’s not confuse means with outcome.

Update: On ableism and handwriting, please read this wonderful post from my friend Rick Godden.

12 Replies to “Handwriting with Tears; Don’t cry for cursive.”