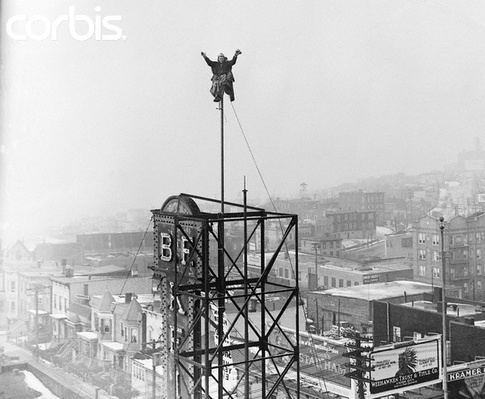 I’d like to welcome all my new readers and sincerely thank you for your interest. The last two posts – on the tasering of a deaf boy and the bullying to prevent bullying – have been among the most read ever on this blog or in re-postings.

I like to write about parenting, disability, and gender as my main topics. But I am also an historian and riveted by the way, to paraphrase a paraphrase of Mark Twain, history doesn’t necessarily repeat, but it seems to rhyme. So at least once a week, I turn to the ways in which history rhymes.

Below is a video from Vanity Fair that talks about pole-sitting in Baltimore in the 1920s. It features the historian Kris Lindenmeyer talking about the trend, the impact on media of spreading this bizarre but cool practice (I like it better than “planking“), and the gender components. There’s also lots of great video.


Watching this video, I was reminded of the Stylites, Byzantine saints who sat a-top pillars, often in highly urban settings. Being a stylite allowed the holy person to isolate themselves from a community while still being visible to the community and often in conversation with the community. St. Simeon is the famous progenitor of this practice, but others followed. David Blaine reportedly based one of his stunts on the pillar saints, but perhaps he just made that claim because it was somehow more dramatic than linking back to pole-sitting.

More recently, pole-sitting has become a form of protest art. For example, Harold David Werder spent over 400 days on a flag-pole to protest the price of gasoline, then at $1.20 a gallon.

There’s probably some deep psychological interpretation that could be made about this urge to be apart but visible, but that’s outside my range of expertise. Today, I’m just in it for the rhyming of history.