Skip to content
“”It is amazing what celebrity can do if you do it with 100 percent good intention and heart.”
– Jenny McCarthy on Oprah.

In 1956, the Polio Vaccine was new and controversial. Then the March of Dimes decided to make the vaccine a major part of its campaign and leveraged its celebrity connections to the cause. This happened. 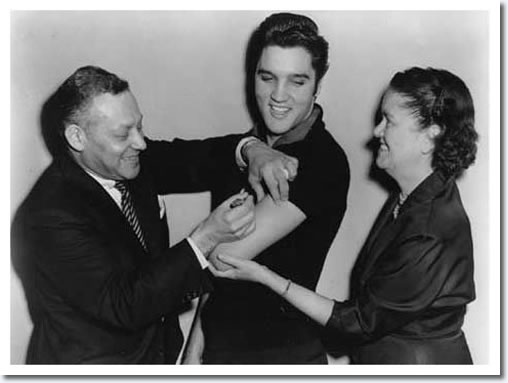 It’s been a lively few weeks in the anti-anti-vax movement, a movement I support with my own writing (mostly as it intersects with disability and representation. The way that Jenny McCarthy and her ilk talk about autism as a disease to be cured is problematic. Not that the public health issues aren’t also problematic, I just don’t have authority as a writer there).
Measles is surging. Mumps is back. The wife of the Chicago Bears QB (Kristin Cavalleri – I understand she’s a reality TV “star,” but I confess I had never heard of her until now) went on Fox Business and made anti-vax statements. And #JennyAsks would be hilarious – except that I don’t think it persuades anyone in the anti-vax league. I still sometimes get anti-vax emails (I delete them).
Jenny McCarthy is right. It /is/ amazing what celebrity can do. But intentions and heart matter a lot less than results.
And Elvis?
Elvis is still The King.

3 Replies to “Celebrity and Vaccination”